Our Faculty is the oldest Faculty of Agriculture in the world. It was conceived and realized by Marquis Cosimo Ridolfi 167 years ago. Cosimo Ridolfi was born in 1794. In 1837 he founded a very special School, in Meleto, Val d’Elsa, Tuscany, were he owned an estate, with the aim of teaching agriculture, and of comparing different cultivation practices and techniques. There, he had previously organized what he called “Riunioni Agrarie”, “Agricultural Meetings”, whose discussions he usually reported in the Tuscan Journal of Agriculture, which had been founded in 1830 by Viesseux. For many years he had a dream: the foundation of an Academic Institute in Tuscany, where Agriculture could be taught. His innovative idea was that of “TEACHING AGRICULTURE IN THE UNIVERSITY”, which, in his mind meant “organizing the sciences applied to agriculture at a university level”. Giving dignity to agricultural studies. He explained his revolutionary project during the FIRST MEETING OF ITALIAN SCIENTISTS, which took place in Pisa  1-15 October 1839. On that occasion the subject was discussed in the Section devoted to agricultural scientists, many of whom claimed the establishment of a Public Institute of Agriculture in Tuscany, following the example of the School founded by Ridolfi in Meleto. The Congress and the themes discussed in Pisa by the whole community of Italian scientists had a great impact all over Italy, and one year later, on October the 5th, 1840, Ridolfi obtained the establishment of the Chair of “Agriculture and Stock-breeding” by Grand Duke Leopoldo II of Lorena, within the frame of the new study curricula at the University of Pisa.

The first Professor was Marquis Cosimo Ridolfi himself, farmer, expert in agricultural sciences and member of the “Academy of Georgofili”. At the time, he was one of the most important agronomists in Europe. Pursuing his idea of conjugating theory and practice, he asked and obtained the Chair of Agriculture to be provided with a piece of land, of about 34 hectares. In 1842 he wrote in the Tuscan Journal of Agriculture that field experiments were important for the needs of an ART SERVED BY MANY SCIENCES and in that very year he found the piece of land he needed, near the river Arno, in the area called Piagge. The official original document evaluating the fruits and vegetables grown by the owner can be found in our Historical Archive in the Professor’s Room nearby. The total amount of money spent was 1.800 Lire.

On the 3rd of January 1843 he gave the official lecture on “Agriculture and stock-breeding” in the Aula Magna of the University of Pisa. His dream had come true. In those very days agriculture was becoming a science, in the proper meaning of the term, thanks to the new discoveries on plant chemical nutrition by Liebig. The transformation of a bucolic exercise into agricultural science was clearly conceived by Cosimo Ridolfi, who claimed that basic research theoretical studies were as important as practical applications for the advancement of agriculture.

The following, on March the 1st, 1844 the University’s School of Agriculture was founded with the official ordinance by the Education Office of the Grand-Duchy of Tuscany. At the end of their studies, students were awarded a Diploma which historically represented the first step towards a degree in Agricultural Sciences. It is interesting to take a look at the study curriculum: a three years track, with 11 courses: 1rst year Mathematics, Physics, Botany, Geometry; 2nd year Geodesy, Applied Geometry, Chemistry; 3rd year Geology, Technical Physics, Rural Architecture, Agronomy.

In 1845 Pietro Cuppari replaced Ridolfi as the Director of the Agriculture Institute. In the meantime Ridolfi became Ministry of Education of the government of Tuscany. In 1871, the very Faculty of Agriculture was established within the University of Pisa. After Cuppari’s death, in 1871, Girolamo Caruso directed the Institute for 46 years, promoting researches on soil fertility and plant health, and mechanized agriculture.

Experimental studies and researches were and are still carried on in the University Farm established by Ridolfi. Later on, the University Farm was absorbed by the city expansion, and a new estate was assigned to our Faculty on 19 April 1963, for teaching and research in agriculture: 1,700 hectares in the Tenuta of Tombolo, half of which is a woodland.  The estate, entitled to Prof. Enrico Avanzi, agronomist and Rector of the University, is located at about 7 km from the Faculty main campus, and is the place where many researches are still carried out by Professors of our Faculty.

Many great persons and famous scientists have been Professors in the Faculty of Agriculture , including Antonio Pacinotti, who taught Mechanics applied to Agriculture, the botanist Giovanni Arcangeli, and the economist Giuseppe Toniolo. The great genetist Guido Pontecorvo was a student in this Faculty. 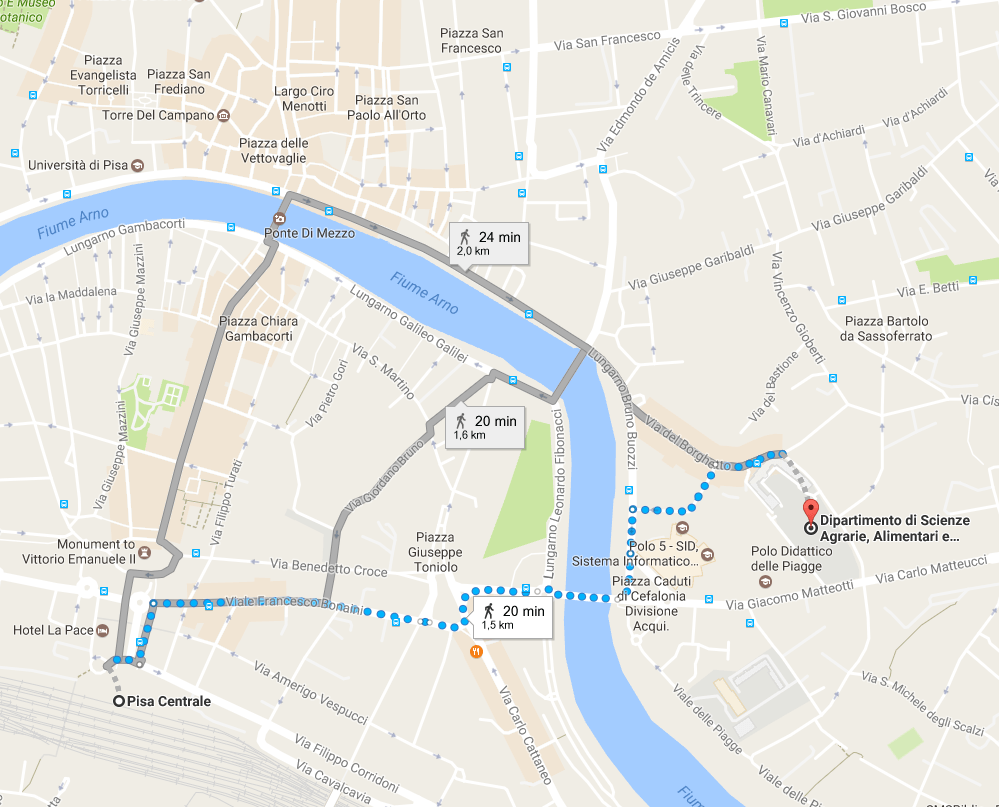